About twenty years ago, I was a young teenager when my two-year older brother introduced me to the increasingly popular card game Magic the Gathering (MTG). We both liked the game a lot and started to collect cards, making sure that all the blue cards would go to my brother and all the black cards would go to me. Back then, my main goal in life was to defeat my brother, a.k.a. the eternal rival, in any game we played. I failed at this goal in pretty much every game, and MTG was no exception. My brother won game after game after game.

But then there was a turning point. A MTG shop opened in our hometown of Blaricum, which started to host tournaments as well with about twenty people participating. I won the first five tournaments they hosted. In some of them, the finale would be between me and my brother. They were tense games, but I won. After reigning as undisputed champion of Blaricum for about a year, I retired from playing MTG tournaments, thus never to be beaten since in any semi-official setting (my brother would go on to become a professional MTG player and subsequently a professional poker player, playing tournaments of both games at the highest levels worldwide).

Me and my brother: two teenage wizards in the middle of a fierce battle of wits and randomness. Note that the bunny referee is not effective as (a) the flowers obstructs the view to the arena, and (b) it is a plushie bunny who has not been educated in the game.

Stacking the deck in my favor

How did I win five consecutive tournaments while statistically I should have lost some times to my brother, a far better MTG player before and after these tournaments? In retrospect, I doubt that my victories were entirely fair. To simplify MTG, each player has their own deck of 60 cards, which consists of 20 lands and 40 spells (for me at least, other players chose different distributions of lands and spells). You start the game by drawing the top 7 cards from your deck, and subsequently draw one more card each turn. Each turn, you can only play one land card, which you use to pay for spells. A crucial aspect of MTG is that you want to start your game with about 2 to 3 lands in your hand. Less, and you are too likely to run dry, not being able to pay for your spells. More, and you don’t have enough spells to play which will surely make you lose the game.

Teenage me learned to employ a certain, questionable, strategy when shuffling my deck: rather than collecting my cards at random, I would quickly re-arrange the lands such that they were equally spread throughout the deck: land, spell, spell, land, spell, spell, etcetera (I would do the same for some combo cards, but will simplify this post to only discuss lands). Thus, I literally stacked the deck in my favor. Next, I would shuffle the deck using the overhand shuffle, but would make sure I did not separate my deck in too many packs (say, three to five packs), and did not repeat the process too many times (say, three times). Why is this strategy questionable? Well, let’s study its effect in R!

First we can load some helper functions (available online here), and set the random seed:

Now, we can construct a dummy MTG deck, with 60 cards, 20 of which are lands that are evenly spread out over the deck:

The highlighted cards represent lands, and the color and number on each card represent the position of the card in the original order. In this beautifully unshuffled deck, I would start with 3 lands in my 7-card opening hand.

Example of a deck after an overhand shuffle with three to five packs, repeated three times.

What do we now see? Sure, the deck is somewhat randomized, but large consecutive blocks of cards remain consecutive, and all the lands remain spread out over the deck. In this case, I would even start my hand with 7 consecutive cards from the original order (54 to 60)! This includes two lands (perfect!), but could even include a nice distribution of spells if I stacked spells too to be spread out over the deck (e.g., no two identical spells next to each other). Let’s compare this to what a properly shuffled deck looks like:

Example of a deck that is properly shuffled.

Now, I would start with 3 lands, but would draw more lands than I would like in the next turns. The last 20 cards would only contain 3 lands, and it would completely ruin my game if those were the first 20 cards.

But these are just two examples. Let’s perform a quick simulation study to check these shuffling strategies, repeating the above 1,000 times: 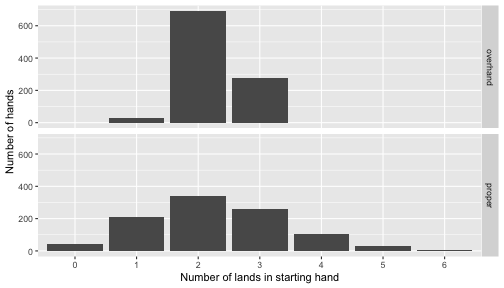 Distribution of number of “land” cards in the starting hand after using my variant of the overhand shuffle and proper shuffling techniques.

This tells us that with my shuffling technique, I am virtually guaranteed to start with 2 to 3 lands, while proper shuffling would add much more randomness. Therefore, my shuffling technique gave me a massive edge over a player who would properly shuffle his or her deck (e.g., my brother, who actually knew how to shuffle a deck as well as proper tournament regulations).

Why did I use questionable Magic practices?

Thinking back on why I employed these questionable practices, I don’t recall myself as a 15-year old boy cheating to win some tournaments. However, I also don’t recall myself being completely oblivious to the effects of my shuffling technique. I knew my shuffling technique would lead to more consistency, but I fully believed I played and won these tournaments fairly. Why? I can think of some reasons:

Why am I suddenly confessing the use of questionable Magic practices two decades ago? Should my five victories be scrapped from the record? Possibly, but I doubt that hardly anyone even remembers them. Should I accept that I am not a masterful MTG player? Probably, but had I continued a career in MTG that would likely soon have been rectified in numerous failed replications in better and more controlled settings.

No, this story is actually not at all about questionable Magic practices, but rather about questionable research practices (QRPs): practices that are not necessarily fraudulent, but that may increase the probability of obtaining a significant finding (increasing the type 1 error rate). QRPs may include, among other things, gathering more data after finding a non-significant result, arbitrary removal of data (outliers), selective reporting of results, ad-hoc hypothesizing and rounding p-values in your favor.

To combat QRPs, we need to understand why people use QRPs. Too often, I see the use of QRPs heavily condemned and the researchers that use them almost painted as fraudsters. However, I believe that researchers that employ QRPs do not do so with bad intentions. My story of winning MTG by stacking the deck in my favor easily translates to possible reasons why researchers employ QRPs:

I think these are all fair reasons from a personal level, and make it clear that for a large part the individual researchers — who likely try their best to perform their research as honest and thorough as they can, ultimately hopefully helping society in general with their findings — are not the ones to blame and should not be condemned as fraudsters.

So how to solve the issues described in this blog post? To me, the answers seem rather straightforward:

CRAN version and preprint!
Simulation studies in R with the ‘parSim’ package

Sacha Epskamp is an assistant professor at the Department of Psychological Methods, University of Amsterdam, interested in psychometrics, network analysis, dynamical system modeling and complexity.